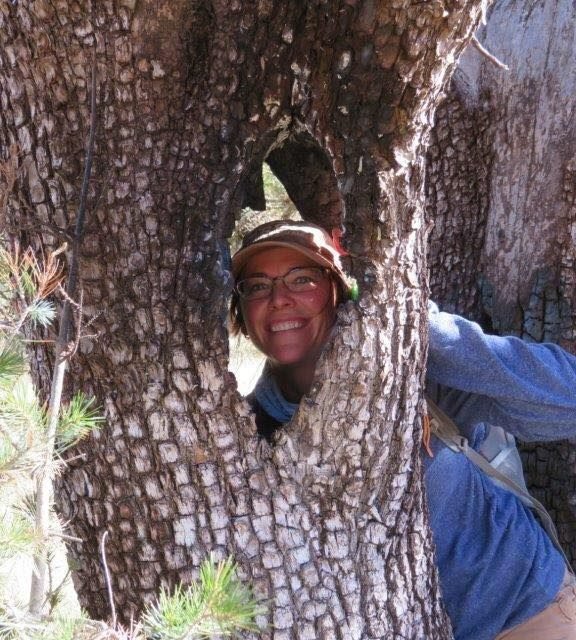 Just over a year ago, as COVID struck, I found brief refuge in Fort Davis. While there, a friend introduced me to Tara Poloskey, the education and outreach coordinator for The Nature Conservancy. An ardent conservationist, equestrian, singer, animal lover and motorcycle rider, Tara has spent nearly two decades educating people while preserving and restoring desert habitat in the Trans-Pecos region.

Tara came to Alpine in 2004 as a graduate student at Sul Ross University after realizing that laboratory work testing water and solids for pollutants didn’t suit her yearning for a wilderness life. At first, she felt intimidated by the remoteness of the region and the darkness of the night. She missed the Detroit-ish, big city conveniences of stores being five minutes away. By the end of that first semester though, her love for the desert took root in her bones.

Now, nearly 17 years later, Tara, her two dogs and her tuxedo cat Buddha are making their sojourn back to the land of endless water and city-bright skies, the Great Lakes of Michigan. On a grey, misty day in preparation for her move, Tara reflects on how this West Texas region has impacted her view of the desert, the conservancy, her self and the future.

On life in the desert:

“Coming from the Michigan marshes where the noise is never-ending, there’s always something moving. The desert’s not always like that, it can be extremely quiet. At first, I thought the desert was just a lot of death. But it’s teeming with life. Every inch of the desert has some life in it. You just have to take time to stop and look. Wildlife is everywhere.”

“Rattlesnakes are a beautiful gift if you have a chance to see one, just not too up close and personal.”

On why conservancy is vital this remote region:

“The Chihuahuan Desert is one of the most biodiverse areas in the entire world due to the region’s sky island phenomena. There are grasslands interrupted by dramatic mountain ranges that seem to appear out of nowhere. The distance from the lower grasslands to the top of that mountain is short and steep, resulting in cooler, wetter conditions in the higher regions. This topography provides enormous habitat diversity and ecological stability, enabling plants and animals to better withstand climate change and human-caused disturbances, as well as disasters like wildfires.

“Nature Conservancy and other organizations protect those habitats by creating resting places—places for plants and animals to thrive; to breed, feed, and communicate with other animals of the same species. Birds come from Alaska, from Mexico, from Central America using our sky islands to jump back and forth from breeding grounds to wintering grounds. Along with the Big Bend Conservation Alliance, Respect Big Bend, the Borderlands Research Institute and the Dixon Water Foundation, we monitor what’s going on, show people how to manage their properties, and take action to prevent disasters. “

On the role of ranchers and private landowners in conservancy:

“Some of our best conservancy partners are ranchers and private landowners. They’ve lived here for generations. They know the climate, they know what works, they know what doesn’t work. They educate us as much as we educate them. When there is a disturbance that’s damaged their land, we’ll work together to ensure their property stays as healthy as it can be.”

“Climate change has shown its face in a huge way. Desertification, drought, loss of grassland, fewer birds migrating, loss of our Ponderosa Pines at the at the Davis Mountains Preserve – these are enormous problems.  Each year more grasslands dry up. The amount of dust in the air is ten times what it was 17 years ago. Creeks don’t flow the way that they used to. Monsoons are later. The weather is more violent.

“These problems need our attention. When you live out here on the brink, the effects of climate change make obvious changes on the landscape and you can’t help but notice and be concerned. Watching the local citizens and guests get engaged in the issues contributing to climate change gives me hope.”

On the legacy she hopes to leave behind:

“I want people to feel as though they have a voice, and that they have access to the places The Nature Conservancy protects. My hope is to make an intimate connection with our mission. One of the ways I do that is bringing people into the preserve so they can take something back they didn’t have before: maybe it’s the vastness of a sweeping vista or being surrounded by a thunderstorm as it forms right above their heads. That intimate experience with nature makes people want to save it. When people leave, I want them to be thinking, “What can I do to keep the Davis Mountains preserved? What can I do to keep Big Bend National Park protected?”

On what she will miss the most:

“Without a doubt, what I’ll miss the most is the sky, the night sky, the stars, the sunrises, sunsets, the clear blue against the red rock of Sleeping Lion Mountain against that deep blue sky.

“And, of course incredible friends, how quirky, welcoming and unique our communities are. And, the ease of parking. You can park anywhere you want, there’s less than a five-minute walk anywhere you want to go. I’m gonna miss that a lot.”

We sat silent for a moment. “You know what I want to do with you?” she asked. “I want to take you to  the Tall Rock Shelter, one of Davis Mountain Preserve’s archeological sites. I want you to go with me to a place in your mind.”

For the next few minutes Tara shared her 26 mile ride down into Little Aguja canyon, with her volunteer. After traversing boulders, navigating cliff edges, and pulling aside branches to navigate the steep terrain, they arrived a bit bruised, dirty and chewing dust. They walked the final 300 feet down into the canyon full of trees – big tooth maples, ash, cottonwoods, vines—to a jagged, angled overhang 100 feet tall. As she passed through the gate into the sanctuary, she was surrounded by several 17 foot rock panels with solid red lines of ancient rock art, bright as if they were painted yesterday. “No one knows what they were for, but many speculate it was a spiritual location.” She paused.

“To be in that space, with the sun on the paint, the trees with their young lime green leaves, one or two birds singing, and a warm sun on my back, was powerful. There was no no other human for miles. That night, as  the sun slowly crept up the overhang, a blackhawk, which is quite uncommon here, flew in the front of the shelter, ascended above the paintings, floated for a minute, then dropped down into the canyon. That is a moment I’ll take with me, forever.” 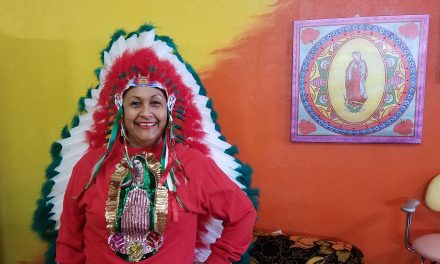