Martha Ryan Stafford was born in Pecos, but her family moved to Marfa when she was 18 months old. She became a teacher in the Marfa school system before moving briefly to Montana, but she returned to the Big Bend and settled in Terlingua, where she taught English for 15 years. She married her husband, “Laughing” Dave Long, in 2006. He was a ranger in Big Bend State Park.

When she and Laughing Dave retired two years ago, they moved to Shafter, the lovely, nearly empty mining town 30 minutes south of Marfa on Highway 67. 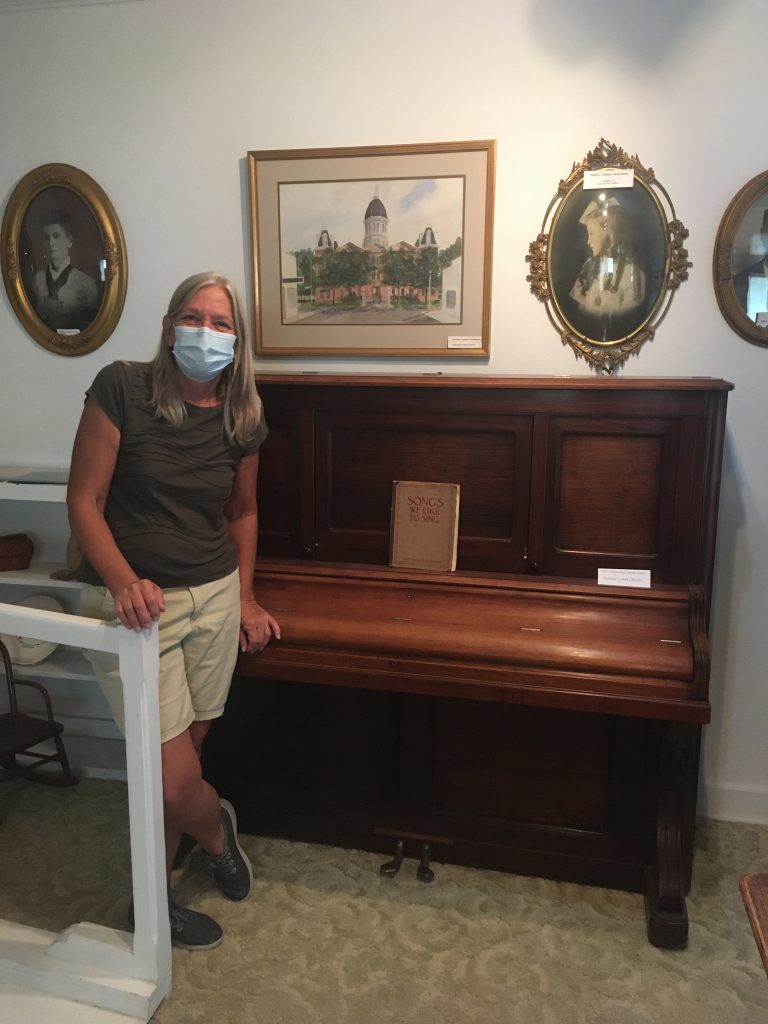 Martha Ryan Stafford shows off one of her favorite pieces, the piano Miss Cass used to teach music lessons to generations of Marfa children. “When I think of how many Marfa fingers have touched those keys, I’m amazed,” she says. “Without knowing where this came from, it’s just an object. Knowing its history, it’s extremely precious.”

Stafford didn’t stay long in retirement; she quickly became involved with the Marfa and Presidio County Museum. With a minor in history and a deep passion for telling the story of her hometown, she filled a part-time position as museum docent with expertise and enthusiasm.

When the pandemic hit the U.S. and the museum closed to the public, her efforts turned toward the archives. She now spends her days in the company of boxes of photographs, old records, letters and artifacts, fighting a battle with time. The objects can be preserved, she says, but without the stories behind them, they become meaningless. Her mission is to match the objects in the museum to their people, places and events before the context is forgotten, so they can be preserved and presented to the public.

Stafford’s dream is to see the museum’s collections properly catalogued and digitized, with a searchable database and permanent records of each piece’s history. “It’s heartbreaking,” she says, “when you have boxes of papers and photographs and the story behind them is lost to time. That’s why you see old photos in every antique store for fifteen cents. Without the story, it’s not worth very much.” Stafford sees this loss of data as a cautionary tale for communities. “That’s what can happen when museums don’t have support.”

Stafford’s love for the museum is evident. She envisions it as a living, vibrant thing. “I do believe that history is the heart of our community,” she says. “And we tell a thorough history of our area.” She sees the museum as serving a dual purpose. “It’s definitely designed for locals. Families are featured, more than a generalized theme. But it has become more visited by tourists.” Stafford welcomes the opportunity to show visitors to the area that Marfa and Presidio County are more than their reputation in the world of art and culture—that her home is a living, evolving entity, shaped by its people, stretching backward and forward through generations.

Audrey Herrera was born and raised in Riverside, California, a suburb of Los Angeles. She graduated from UC Riverside with a degree in Art History. After leaving school, she worked for the city of Los Angeles, but her heart’s desire was to work in an art museum. 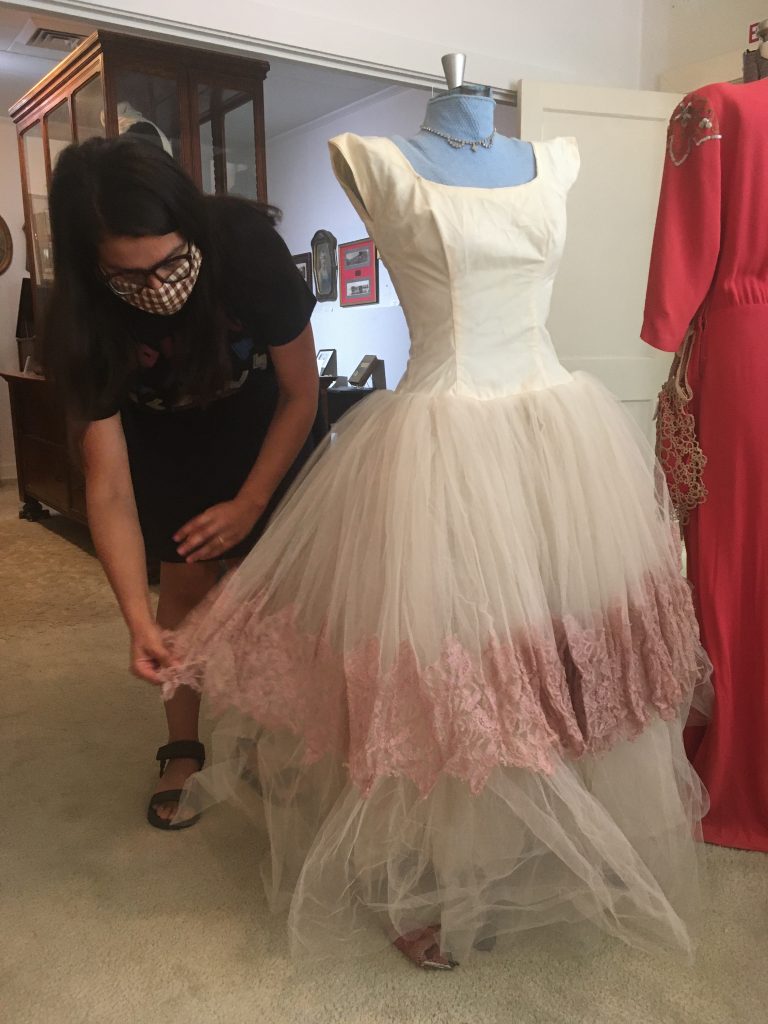 Audrey Herrera adjusts the skirt on a delicate party dress.

Donald Judd was one of the topics covered in an art class in school, and when she saw an opening at the Chinati Foundation for an internship, she applied for it. She received the position and moved to Marfa.

The culture shock of that transition was mostly felt in the darkness and silence of Presidio County, a stark contrast to the bright lights and bustle of southern California. There were other differences, too: the small town where everyone knows everyone, the close-knit community where it’s easy to jump in and participate.

When the Covid-19 pandemic ended her internship unexpectedly, Herrera took a position at the Marfa and Presidio County Museum. Though a history museum is an unexpected twist for her curriculum vitae, she says she has a deep appreciation for the work she finds herself doing.

“Working in a museum like this has a purpose,” she says. “Working with the archives is important.” Part of Herrera’s involvement in the community has been to lend her talents to the Marfa school system’s Summer Shakeup, an educational program that provides activities for Presidio County’s youth. The museum also participates, giving tours and sponsoring history projects throughout the summer months.

Herrera’s passion is still art. “I don’t make art myself,” she says, “but I am a creative person.” She has found new outlets for that creativity in her new home, including the Summer Shakeup and her work at the museum, which sometimes involves unusual solutions to unexpected problems.

The stunning collection of 19th and early 20th century dresses, for example, often don’t fit on modern mannequins. “Women in those days were tiny,” Hererra says, gesturing to a delicate party dress. “We’re considering trying some children’s mannequins for the displays.” She said she particularly enjoys staging exhibits in the museum’s various themed rooms.

Hererra’s other creative outlet in Marfa is at Wienertown, once a pop-up hot dog stand by the Pizza Foundation, now with a permanent location near Ballroom Marfa as well. “I express myself through hot dogs these days,” she says with a grin.

Hererra’s first year in Marfa was just coming to pass at the time of this interview. “It’s my Marfaversary,” she says. In that time, she has dived headlong into the town’s history, culture and community, adding her own threads to the tapestry of Presidio County’s people.

The Marfa and Presidio County Museum

On Highway 90, just west of the four-way stop in Marfa, sits a beautiful white adobe house. This is the home of the Marfa and Presidio County Museum, but how it came to rest there is a story worth telling.

In the mid-1960s, high school teacher Lee Bennett asked her students to use primary sources of information to write history papers about local people and events. She asked that these sources include remembrances from parents and grandparents, with photographs whenever possible. Over the ensuing years, students became increasingly interested in their history, and began bringing artifacts to the classroom along with their papers and photos. Flatirons, old nails, antique clothing and other family heirlooms were displayed on Bennett’s schoolroom shelves.

In 1966, Eddie Hernandez, then the president of the Junior Historians, approached Mrs. Bennett and asked, “Why doesn’t Marfa have a museum? Why can’t one be started?” With this prompting, students began creating a mini-museum in the high school.

In 1968, the students organized a list of Marfa locals they felt were “movers and shakers” to form a planning committee for a museum. At the first meeting, Lee Bennett reported that the youth had already collected 1500 photographs and numerous small artifacts, which the Junior Historians intended to give to the new museum as a permanent loan.

In November of that year, Mayor Macfarland of Marfa donated the Frank Duncan photography collection to the Junior Historians. Duncan was an early photographer in the region, known for his panoramas. At this time, the committee was leaning toward using a railroad car for the museum, and enthusiastic locals began donating funds, ephemera and artifacts to the cause. Later, building plans were proposed, though funds were lacking and the plans were never realized, despite a groundbreaking in 1971.

The 1970s saw continued enthusiasm for a museum, including temporary displays of the collection and photograph identification parties, but funds were lacking to build one. Finally, in 1979, the R.E.L Tyler home was purchased to be used for the museum. The grand opening was held July 18, 1980. In 1996, the former Humphris home, built in 1893, was sold to the city with the express intention of becoming the museum’s new home.

The whole story of the creation of the museum, lovingly documented by Lee Bennett, is available as a booklet from the museum itself.

The various rooms in the old adobe each have a theme. The entrance hall highlights Marfa’s film history, with “Giant” prominently displayed. There is a room for prehistory, featuring fossils and minerals (including a massive mammoth clavicle); a room for Frank Duncan’s photographs with period camera equipment, expertly identified and catalogued by volunteer Terry Norman; a technologies room featuring Valentine’s original telephone switchboard; a post office and general store room, with Valentine’s original post office boxes, sparkling with their original cut glass fronts; mining from Shafter and ranching history are represented, as are homesteading life, fashion, the air base and family histories. This year, docent Audrey Herrera secured an exhibit from the National Archives about women’s suffrage, to celebrate its centennial. She curated period costuming and ballot boxes to supplement the display. The archives are open to researchers and genealogists, and the collection is in a state of constant organization as more research and digitization is accomplished.

The old Humphris house is an excellent home for the museum, but it is also in need of repairs. Cement plaster applied over the adobe brick allowed water to wick into the walls over the years, causing massive cracking and settling on the east side of the house. The museum was able to stabilize the structure with financial help from the county, but all the old plaster needs to be removed and the walls shored up and replastered for the repairs to be meaningful. The museum is seeking both grants and private donations to accomplish this, so it can continue its mission of preserving, interpreting and sharing the history of the region.

A primitive cooling box. Water was added to the top and bottom trays, where it could wick into the canvas fabric. Placed outside in the shade, evaporation kept the contents cool. 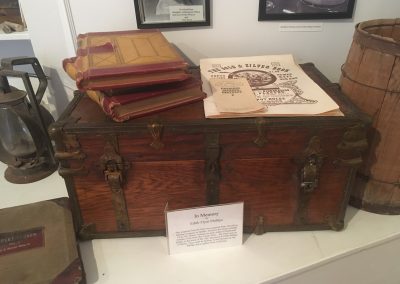 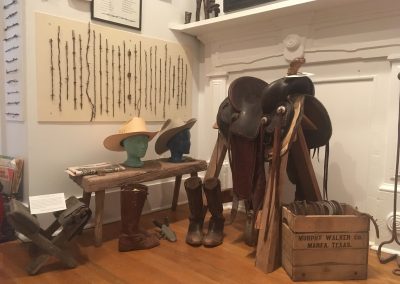 The Ranch Room in the Marfa and Presidio County Museum. 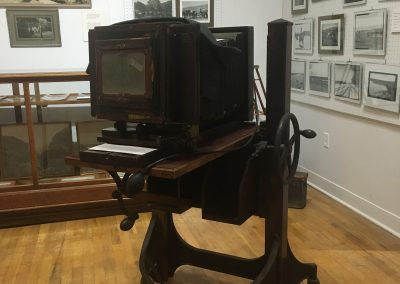 In the Frank Duncan photography room, a Century Studio camera is displayed. Volunteer Terry Norman, a retired Border Patrol officer, worked tirelessly to identify and catalogue the equipment for these displays. 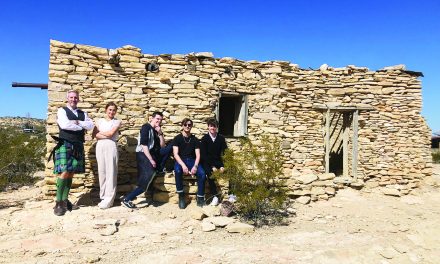 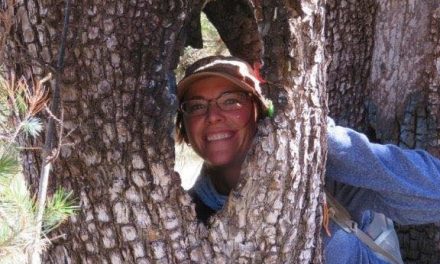