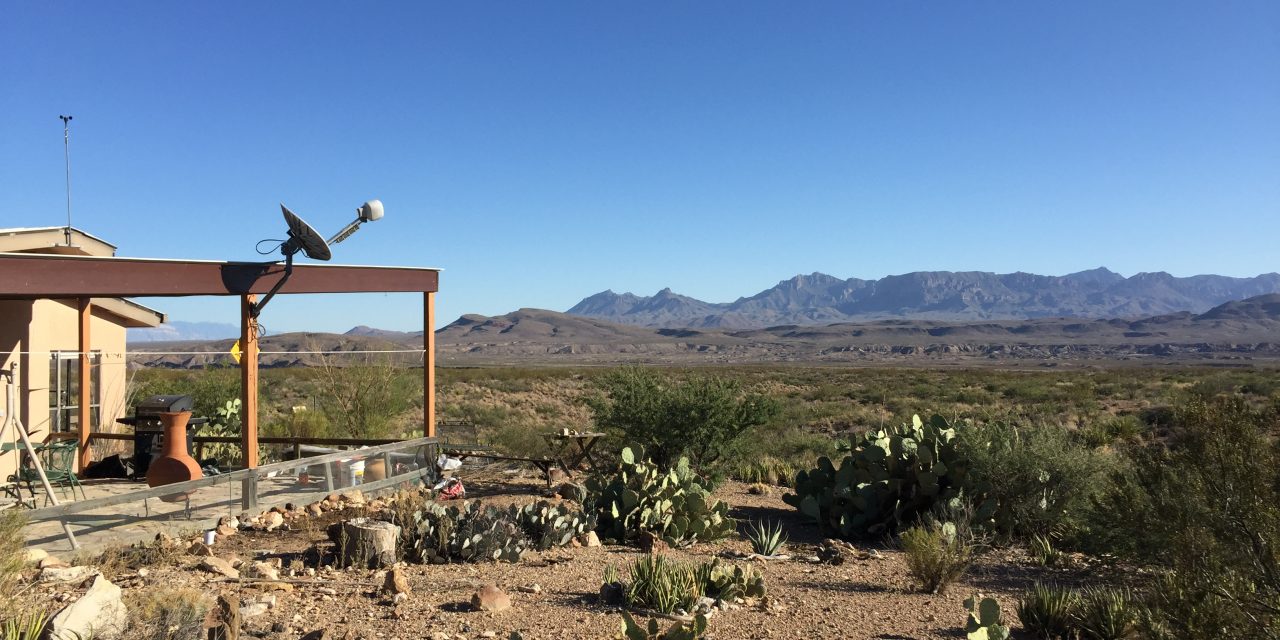 It was a day in mid-December about six years ago. We left early in the darkness of morning from our house on Terlingua Ranch for our every-other-week trip to Alpine. We were always determined to have enough time to get everything done and still get home before dark.  It’s 82 miles one way and takes about an hour and three quarters.  As usual, the Border Patrol just waved us through, recognizing our vehicle.

We had our typical list of errands and thorough lists for shopping:  hardware store for supplies, bank, post office to mail holiday packages, library, gas station to fuel our car and fill gas containers for our generator. A break for lunch at La Casita for enchiladas and tacos, and then lastly, groceries. The day passed quickly, and we headed home.

Tired but glad to be done, there was still plenty of daylight as we traversed the last five miles of dirt road to our house.  We pulled up under the carport and carried our little dog Gracie and a couple of bags through the kitchen door.

I stopped as I crossed the threshold. “Charlie, did we leave these cabinets open when we left this morning?” I asked. Two of the bottom cabinets in our kitchen were standing open.

That started us looking around. Other than the cabinet doors being open, nothing initially looked disturbed.  But I could see that some food was missing from the cabinets—cereal and crackers were the most obvious. In the back hall where our clothes and shoes are kept, my hiking boots were gone, as were Charlie’s work boots. And our daypacks.

I was bummed. They were nice hiking boots I’d just gotten a few weeks back at the thrift store.  Almost 23 years living out here and no one had ever broken in or taken anything. We had always known we were vulnerable, living so far from anyone else.  But it had never happened. It felt weird and a little creepy.

I got worried about our musical instruments, so I went through the cases. They were all there. And our computer was okay. Of course, I was glad about that; but I was feeling miffed at having to check everything and that someone had been in our house going through things.

As we were continuing to look around, Charlie called to me from the patio. “Come here and look at this, Judy.”  He was holding a strange plastic bottle wrapped in old torn canvas with a crude carrying strap made from twine.  “I bet it was some Mexican people crossing the desert and needing supplies.”  We had heard about Mexican people walking north but had never encountered any.

We walked around outside, looking in all directions from our house, thinking we might still see them. All we saw was the vast desert.

My feelings instantly changed, as I thought about this being people walking far from home across this very rugged and difficult country. My anger dissolved and I felt like maybe we had been of some help to them. And after all, basically they had only taken necessities and didn’t seem to have disturbed anything else.

Charlie agreed. “Well, let’s bring the rest of our stuff in from the car and have dinner.”

Beginning dinner preparations, we discovered some things missing from our refrigerator. Carrots, gone. Lunch meat, gone. Cheese, gone. Frozen shrimp? (Were these gourmet Mexicans?) “Oh dang!!  My eggnog is gone!” Charlie slapped the counter with his hand. Suddenly this became personal. Charlie looked forward to his eggnog all year and had just bought it a few days earlier in Study Butte. But he burst out laughing and we both let go of some of our tension, just laughing.

Strange beyond all else, they had taken my mother’s 50-year-old little popsicle mold that was in the freezer. “Oh come on, it’s December. . . what did they need popsicles for?  And what can they possibly need my mom’s mold for?” A little more feeling of loss crept into my good feelings of helping these people with their trek. My mother had died 40 years ago, and it was another part of her gone. For days, I looked and looked all around and never did find it.

Over the next days, especially when we went to eat something or cook something we noticed a few more things missing. It was puzzling to us that they left their water bottle—we have a 3,000 gallon water tank right next to the house with a hose attached to it.  We would have thought that water would be the main incentive to come to a house. We wondered if maybe they had heard our car coming and had run off, accidentally leaving it behind.

We didn’t know whether to report this. We called it a “visit” since it wasn’t really a break-in; we don’t lock our doors. We live so far from anyone else, someone wanting in would have all the time in the world. So we don’t bother. Saves a broken window or door. At that point, we hadn’t heard any stories of break-ins in our area, nor of Mexican people searching for supplies as they crossed the dry and rugged landscape through Big Bend National Park, then Terlingua Ranch, and northward. Later, as we told others about our experience, we did start to hear stories.

We were more curious than anything. Who were these folks and where were they from?  Where did they likely cross? Which way did they probably go from our house? So we called a man we knew of who was the Border Patrol agent in Big Bend National Park at that time.  We had played music with his son, who was a student at Terlingua High School. He came out to our house a day or so later and we all pored over a relief map we had of BBNP and the surrounding area.  Mark showed us the likely route the people had taken, saying that it wasn’t a usual route, that they probably had gotten lost. He speculated that they had hired a “coyote,” a guide to help them cross the border, and that he had left them to find the rest of their way north, perhaps breaking their agreement.  He figured they were lost and needed water and food, and obviously boots and packs.

Some days later, our local deputy Patrick came over, having heard about this, and brought photos of items that had been retrieved from some Mexican people who were picked up. None of it was ours. We told him we were not really looking for our things to be returned.

As days went by, we did hear of a few other “visits” that sounded similar to ours. One neighbor about three miles away had alcohol and guns visible in their home and they were not taken, only food and water.

It is hard to imagine what it would be like, being out in this wilderness with only a rough idea of where you are headed, not knowing how long it will take to get somewhere you feel safe, not knowing where you will find water, let alone food.

After this happened, we started leaving a covered plastic container of bottled water and canned foods (and a can opener) on our patio with a note in Spanish inviting future “visitors” to help themselves to food and water. In these years since, no one has ever taken any of this. And still, every time we return from a day in Alpine, we go into our house watchfully.

By the way, I bought a new popsicle mold, so we have popsicles again. But I’m still looking for my mother’s when I’m walking near our house.