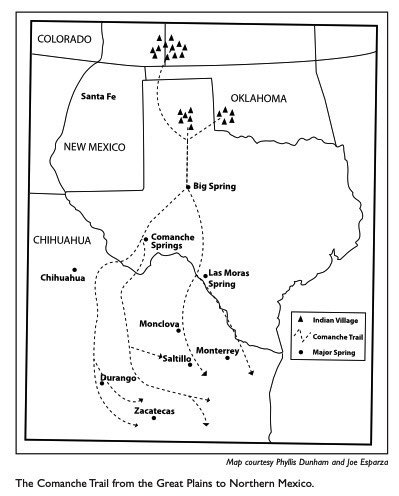 Obscured by time and nature, the Comanche Trail that once cut through West Texas is now more a legend than a fact, but its traces can be found on old maps, in history books and novels and, in a few places, still engraved into the desert soil. According to Big Bend National Park archeologist Tom Alex, the remains of the trail’s networks in the park are readily apparent only from an aerial perspective these days, but it is still quite visible on the ground near Fort Stockton.

What was the Comanche Trail? What was it used for? How was it forged?

These questions can only be answered by first understanding the revolutionary encounter of the nomadic, buffalo-hunting Comanches with the horse. Before that fateful meeting, Comanches, a branch of Shoshones from what is now Wyoming, had been considered a backward people by other Plains Indians. They neither wove nor made pots. Their society was flat and simple with neither religious nor military chiefs beyond the leaders of small hunting bands. They had been kicked around and pushed hither and yon by other nations. Until, that is, they mount- ed horses. Then everything changed – irrevocably.

The Comanches’ astonishing horse- back rise to dominance of much of the Great Plains of Texas, Oklahoma, New Mexico, Colorado and Kansas was based on their unparalleled proficiency in all things equine. Unlike most other Indians, they selectively bred their own horses and even gelded them for battle, and they disdained the Apache practice of eating horseflesh.

While the Apache, Kiowa, Sioux, Cheyenne, Blackfoot, Crow and others certainly prospered utilizing horses, none approached the expertise of the Comanches, who, within a few generations, so mastered horsemanship that Col. Richard Dodge, one of the first American military commanders to observe their skill, called them the “finest light cavalry in the world.”

What is astounding is that this revolution occurred largely beyond the knowledge and reach of the Europeans and Americans who had unwittingly provided the stray horses upon which the Comanches built their realm.

By the time the American settlers and military were aware that they even existed, the People, as they called themselves, had fought for and won vast stretches of the Great Plains’ buffalo-hunting grounds from other nations. Their empire encompassed 240,000 square miles of what historian T. S. Fehrenbach refers to as the “richest portions of the North American bison plains, the southern stretches below the Arkansas.”

The profound bond between warrior and horse began early in life. Comanche children the age of modern day-school- ers played games on horseback to learn skills that would serve them in future battles and raids. Games included pick- ing up objects from the ground while riding at full gallop, practice for rescuing fallen battlefield comrades.

Contrary to the depictions in John Ford Westerns, it was Comanches, rather than Apaches, who originated the tactic of surrounding their prey in concentric, opposite-turning wheel formations. And it was Comanches who devised the art of sliding to the side of the horse in order to shoot from under its neck. In this fashion, according to Empire of the Summer Moon by S. C. Gwynne, a warrior could “loose twenty arrows in the time it took a soldier to load and fire one round from his musket.” Also according to Gwynne, “It was not uncommon for a Comanche warrior to have one hundred to two hundred mounts, or for a chief to have fifteen hundred.”

The Comanche story is rife with superlatives. They were arguably the most powerful group of Indians in North America. They couldn’t be out-ridden. They couldn’t be outshot. They controlled more territory and owned more horses than anyone else – which brings us back to the creation of the Comanche Trail. If Willie Sutton robbed banks because that’s where the money was, by the early 19th century Comanches raided Mexico because that’s where the horses were. Lots of horses. Relatively unguarded horses.

The Spanish presidios along the northeastern edge of Mexico were widely scattered, and the settlements between and beyond them were, therefore, insufficiently protected. Like a magnet over iron filings, their vulnerability and rich pickings annually enticed Comanche raiding parties across the West Texas desert during the summer and early fall. The raids, often occurring by the light of the full moon, inspired the term Comanche Moon – a time of sleepless fear for the Comanches’ targets.

By this time Comanches were also lured by the goodies and skills that European-based cultures offered. The People were now well-seasoned traders as well as warriors. They raided and traded not only for horses, cattle and mules, but also human captives, who could be traded as slaves for additional loot. They also took lead from mines for ammunition, silver for decorating horses, rifles for war- fare and even Mexican black- smiths who could turn shoddy, broken firearms and pilfered metals into tools. Among the artifacts that local archeologist Richard Walter has seen are arrowheads stamped from a flattened gun barrel and from stolen silverware.

Walter says that the raids were so profitable that some Comanches could actually hire Navajos to make trappings for their horses. For such a resourceful and practical people the Comanches were curiously fond of decorations and would trade cattle and horses for what Walter calls “pretty stuff,” such as cheap carnival jewelry with which they could ornament themselves and their horses. Comanche embellishments included not only bright and shiny trade objects but also scalps, animal skins and horns, cavalry jackets, bits of mirror on their shields and strips of fabric trailing from horses’ manes and tails and warriors’ braids, all of it fluttering in the desert wind.

Perhaps intentionally, the incongruous, and often outrageous, combinations of adornments were perplexing and terrifying to the so-called civilized.

Whatever the purpose, whether it was to indicate status or inspire fear, ornamentation was important to the Comanches, who spent so much time in the acquisition and application thereof that Walter refers to them as the “low riders” of the Indian world.

There is no doubt, however, about the purpose of the Comanche Trail. David Keller, an archeologist with the Center for Big Bend Studies, calls it the Comanches’ “interstate” for reaching Mexico and driving their loot back northward. The sheer numbers – hundreds and thousands – of captured beasts and humans pushed back through West Texas toward Comanche territory on the Great Plains etched the various branches of the trail into the desert floor. It is a system rather than a single thread. From Horsehead Crossing on the Pecos River near present day Girvin, the trail leads south- ward to Comanche Springs in what is now Fort Stockton, before subdividing into the veins that cross the Big Bend and the capillaries beyond the Rio Grande.

Although the system is dot ted with watering holes along the way (it included a stop at the springs just south of Marathon at what is now known as Post Park), many of the captives and livestock did not survive the brutal southern-most portions. The trail, over a mile wide in some segments, was littered with their bleached bones. Witnesses who reported seeing the extraordinary con- voys of livestock and Comanche raiders in their dusty procession northward near modern Fort Stockton could not have imagined the magnitude of the devastation left behind in Mexico. For although Comanches were known to be kind to certain captives (so much so that many, including the famous Cynthia Ann Parker, chose to remain with them), the raids were ruthless, cutting swaths of blood and destruction across Mexico’s northeastern provinces.

By the time that most famous Comanche leader of all, Quanah Parker, the half-Comanche son of Cynthia Ann, made his first raid into Mexico and back long the trail in 1868, Fort Stockton had been built and the adjacent Comanche Springs were no longer available to the Comanches. When they reached Mexico, the 20-year-old Quanah and his fellow raiders found few horses, and even those were closely guarded. He returned home on foot. The mission was a disaster. His future battles would be with the soldiers and settlers on this side of the Mexico-Texas border.

The days of the Comanche Trail were over except in memory.

But it lives on in one of the most blood-chilling passages of American literature. Cormac McCarthy includes, in his novel Blood Meridian, an unforgettable visualization of the Comanche Trail in use. Terrifyingly paint- ed and festooned with the gee-gaws of trade and plunder, both warriors and their mounts present a horrific sight. Like something from a Mad Max movie, they drive horses, mules and cattle northward, billowing dust and terror, “clad in costumes attic or biblical or wardrobed out of a fevered dream with the skins of animals and silk finery and pieces of uniforms still tracked with the blood of previous owners…one in a stovepipe hat and one with an umbrella and one in white stockings and a bloodstained wedding veil… one in a pigeon tailed coat worn backwards…with their braids spliced up with the hair of other beasts until they trailed upon the ground.”

No wonder so few could sleep under the light of the Comanche Moon.

Phyllis Dunham writes on music, food, travel and adventure. A transplanted Austinite with family roots in the area, she spends weekends hiking and exploring the Big Bend.  e-mail: phyllis_dunham@yahoo.com 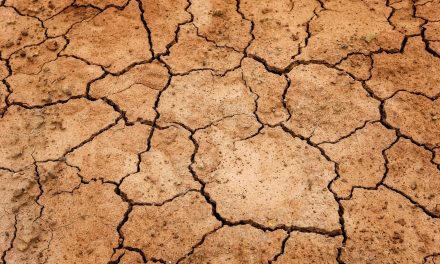 The Passing of A. Kelly Pruitt