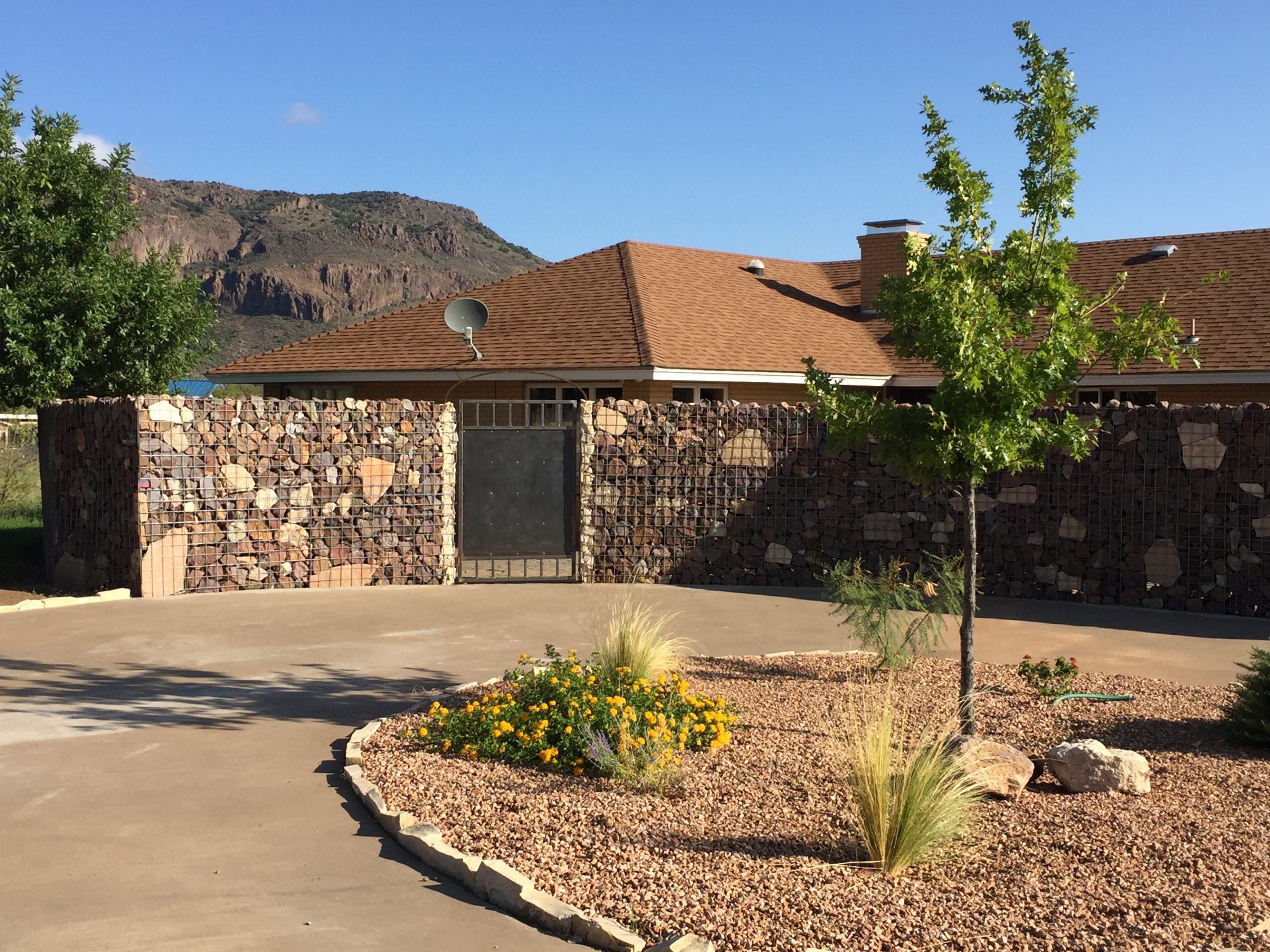 Are you crazy enough to buy a house outside a small desert town after a brief stop at one of its local lunch spots? Maybe you would want to invest in a nice leisurely dinner to be certain that you are keen on the area and its food. Even the original cowboy settlers confirmed that the land had water and cattle fodder before settling in. Such a spur of the moment decision—would you do such a thing?

Thinking we were an anomaly, my husband and I were astonished to hear of other adventurous couples who, like ourselves, traveled to the Big Bend region then returned home only to pull up roots and move there. For what?

The road trip that brought us out west was partially due to feelings of guilt over never taking our children to the Big Bend National Park. Now that we were empty nesters living forty-five minutes west of Houston in an expanding town called Fulshear, we thought it would be a splendid idea to see what West Texas was really all about. So, in May of 2015 we rented a little adobe house in Marathon for a week. One of those days we made a trip to Alpine for brunch at Judy’s Bread and Breakfast, as we wanted to investigate this western town with a name that was definitely Sound of Music—worthy and oozed the promise of surrounding mountains. Being a licensed real estate broker at the time, I perused the local real estate pamphlets wherever we traveled, and this time was no different—well, it was a little different because we actually went to see one of the homes. This particular house looked like our style: a low slung, brick ranch on acreage close to town with vista views and in dire need of tender loving care (to be honest, it needed oodles of tender loving care).

It was the most impulsive purchase we’ve made in our thirty-six years of marriage. Wildly freeing. Though it meant two years of nine-hour drives from Houston to Alpine for remodeling work on weekends and vacations, we have never regretted our decision. Once the interior was close to completion, our many working trips out to West Texas involved me driving a car and my husband driving a U-Haul truck with various furniture, boxes, bags, fishing kayaks, stained glass lamps, quilts and our precious rugs inside. I lost count of the number of U- Haul trips we made, but it was enough to make our neighbors, who work for the border patrol, suspicious. We were like a well-oiled machine—backing the U-Haul up to our garage door in the evening and then efficiently removing it by mid-morning. We eventually made enough trips to relocate our entire household without hiring professionals. It wasn’t easy, but it was a good exercise in time and money management. 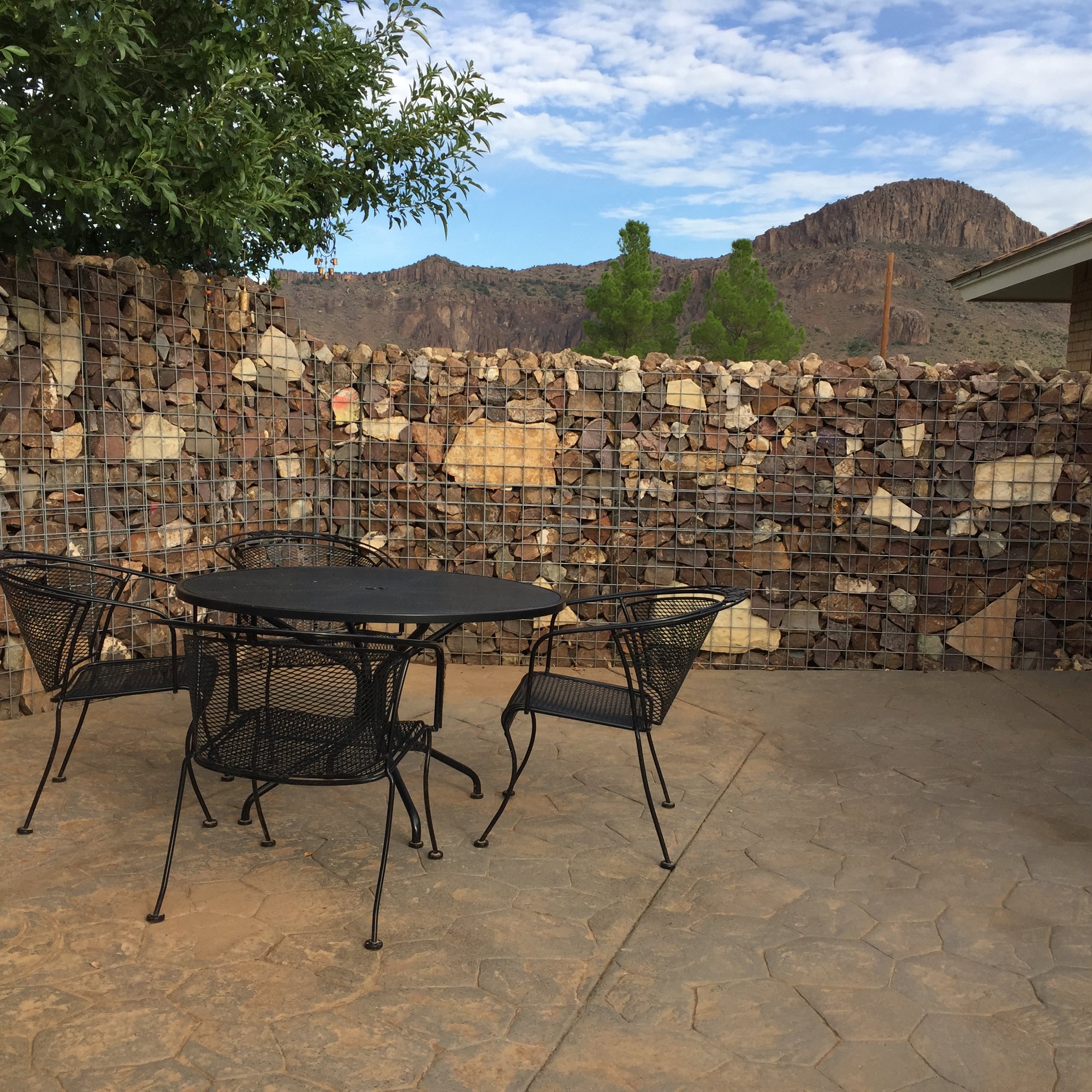 In the beginning, having no family or friends in the area to rely on meant that we didn’t know who to call—and more importantly who NOT to call—for household projects. Since we moved in before the remodeling was completed and after a few subsequent years of investing our own labor, we have become DIY pros. One of the biggest projects beyond the painting, rewiring the disastrous electrical job done on the house during the remodel, installing all the baseboards, window trim, oven, range and hood, toilets and sinks, was our patio and gabion wall—the first of its kind to be built in Alpine as far as we know.

For this project, we were referred to a local contractor who told us it would take three weeks from start to finish. By this time, we had heard and grown accustomed to the phrase “Alpine time,” so we thought he realistically meant eight weeks and we were okay with that. After all, part of the reason we moved here was to wind down and live life at a much slower pace. The project started in the beginning of February (a month behind schedule) and we were shocked to discover that soon the workers would show up for a day or two and then disappear for a week or more before returning. Four long months later, we had the concrete patio and a little more than half of the wall built, but no one seemed to be coming to work anymore. Abandoned tools littered the yard along with a wheelbarrow, piles of concrete (which had hardened on the ground), and mounds of dirt and rocks were strewn around the property. The contractor—never an overly communicative person—ignored my phone calls and emails. We heard zilch from him. Finally, he answered my last email and said he wasn’t finishing the job. He told me that he had underbid the work. Even though we offered to pay for additional labor and materials, he told me that he still didn’t want to finish. It was a terrible, gut-wrenching feeling to be left with completing such a momentous task at our age. I think I was in shock, so I tried to put my head in the desert sand and ignore what was ahead of us.

We are 69 and 71 years old, and like many people in far West Texas, we are both moderately active and keep ourselves in relatively healthy shape. But, when it comes to breaking rocks in the sweltering desert sun, I had solid doubts regarding our ability to turn our old selves into construction laborers. But we had to begin somewhere, so in true Texas fashion, we began a quest to finish our wall and would not let our age be an obstacle.

Since moving here, we have made a handful of friends and acquaintances who, when they heard of our predicament, were quick to lend a hand. We received a very large donation of rocks which, along with those we picked up roadside, were enough to complete the wall. Three of us worked on the wall: my husband broke rocks daily with a long-handled sledgehammer, and one of the contractor’s ex-employees—an industrious younger woman—and I fit the rocks tightly into the cage forming the wall. Gabion walls are similar to working a jigsaw puzzle— sometimes a rock simply slips seamlessly into place and other times you have to hunt for the perfect position or find an odd-shaped rock to use in that spot instead. I am no geologist, but I came to appreciate the beauty of each individual rock we put into that wall. Some glistened in the sun, others had unique colors, some patterns; and we found a few fossils which were strategically placed so that visitors could delight in discovering them on their own: something unique when “wall watching”.

Now that the gabion wall project is complete, I can appreciate what lifting an assorted size of rocks above your head and working them down into the cage to form the wall does for a human body. After a few weeks of labor, we began to feel great and my husband had muscles upon muscles from wielding that mighty sledgehammer day after day. We both agree that our workouts building that wall were better for us than any gym routine could ever be, and at the end of the day there was the additional satisfaction of a job well done. One huge pat on the back. It’s all about turning the negative into the positive—having an optimistic approach to life’s unprecedented twists and turns.

Living in the desert among the cactus has its challenges, and we have learned to be extremely self-reliant and patient as time does slow down in West Texas. People who make their home in the Big Bend area are interesting characters that thrive on overcoming adversity, being independent, and, when necessary, offering help to neighbors in need.

We are in love with this solitary space, its people, and the calm, rustic lifestyle out here in the Chihuahuan Desert. It might not be for everyone, but it is definitely for us.

“A gabion (from Italian gabbione meaning “big cage”; from Italian gabbia and Latin cavea meaning “cage”) is a cage, cylinder or box filled with rocks, concrete, or sometimes sand and soil for use in civil engineering, road building, military applications and landscaping.” 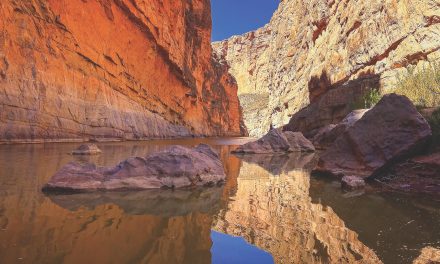 Ann Richards and the Lost Eagle 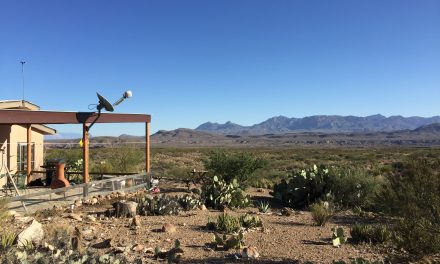