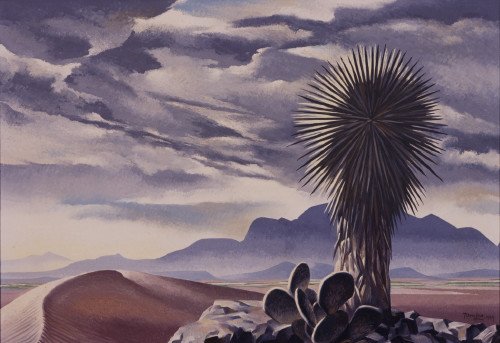 For eight years artist Tom Lea’s Rio Grande hung in the Oval Office of President George W . Bush, lending to that room’s gravity the spirit of the Trans Pecos. A near- monochromatic landscape, it reveals the rugged and serene grandeur of the land Lea loved so well, a region he would never leave.

Rio Grande (on loan from the El Paso Museum of Art) was for President Bush “a symbol of (Lea’s) hopeful
outlook for each day .” In numerous speeches, including his acceptance speech for the Republican nomina-
tion, Bush quoted Lea’s thoughts that he preferred living on the east side of the mountain so as to see “the day that is coming,” forhim, “the best day .” This thought was echoed at the dedication ceremony of the George W. Bush Library in the former president’s emotional summation that he will always believe “our nation’s best days lie ahead.” And regarding that Library, the Oval Office replicated therein has a reproduction of that landscape as well as other Western-themed art Bush so appreciated.

Rio Grande is only one of many paintings and murals inspired by Lea’s beloved El Paso region. These desert landscapes resonate with the space, the light, the mass, and the life that springs from rocky soil. The infamous Rock House and other fires of 2011, consuming the window dressing that had, over the years, camouflaged large swaths of land in the Chihuahuan Desert, exposed its bare bones. Lea’s landscapes, painted in earlier times, celebrated that starkness. When asked once what he found so special about the “dried up, bare, empty country” he chose to live in, his reply back then resonates with many of us today: “I love it for the intensity of its sunlight, the clarity of its sky, the hugeness of its space, its revealed structure of naked earth’s primal form without adornment.”

Tom Lea was an El Paso boy, born and raised three miles from the Rio Grande. With the exception of brief sojourns, he spent his entire life there. He was born in 1907, his father a lawyer who became the mayor of the city during the Mexican Revolution. Once, when his father and Pancho Villa had words and Tom Sr. threw Villa’s wife and brother in jail on suspicion of gun running, the Revolutionary general put out a notice in Mexico offering $1,000 in gold for the mayor, dead or alive. He also threatened to kidnap the two Lea sons, so for six months Tom and Joe went to school every day with a police escort.

Tom began art classes in school as soon as he could – his sophomore year. By his senior year he was taking double classes of art and English at the junior college level. Also, he was editor-in- chief and illustrator of the yearbook. Upon graduation he went to the Art Institute of Chicago where he studied and later apprenticed under muralist John Norton, a former Rough Rider whose western type of instruction pleased his father, who wanted to see his son study under a man’s man.

That he never got over being homesick for El Paso while in Chicago was a condition that remained with him. He and his first wife Nancy spent a short time in Santa Fe after they left the Art Institute, but returned to his native city when she fell ill and ultimately died from a botched appendectomy . He had returned home to stay.

By the time the WPA art project began in 1935, Tom Lea had adopted the style most frequently found in his public works, American Scene painting. A Regionalist, he saw rural life as America’s cultural back- bone and expressed that belief in the murals he did for government buildings. In 1935, he was commissioned by the Texas Centennial Celebration to create two murals for the Hall of State, the shrine to Texas history to be built at Fair Park in Dallas. At one end of the room that is now the Dealey Library is an iconic cowboy; at the other, a Family, with father, mother and son in a wagon headed out from a settlement that could have been early El Paso. Lea used his brother and sister-in-law as models for the scene.

When the United States became involved in World War II, Lea was commissioned by Life magazine as a combat artist. From four tours of duty, his best-known drawings were those of the Marine assault on Peleliu. He went ashore 15 minutes after the first wave, armed only with the Marine Ka-Bar knife he used to sharpen his pencils, and spent 32 hours under withering fire. More than two-thirds of the division was either killed or wounded. Unable even to sketch anything during the shelling, he returned to the ship and “before (his) hand steadied. . . put down the words and pictures of the fight.” Public reaction to his paintings in Life was to recoil at the horrific images of war; even today viewers find them haunting. For Lea, however, what he presented revealed the heroism of the men in a hellish situation. This was his version of the Marines. Still, it took painting a portrait of his beloved wife Sarah, to exorcise the sights and sounds he’d recorded. From Life’s nine war artists’ 200 or so paintings presented to the government, the greatest number were by Tom Lea.

Prior to his time with Life, Lea had met the author J. Frank Dobie, becoming a close friend. Initially, he illustrated Dobie’s Apache Gold and Yaqui Silver, an opportunity that established his credibility in illustration work, and later he illustrated The Longhorns. The study for the latter’s drawings took him into the brush country of south Texas and Mexico. He developed a keen interest in the cattle industry , particularly in bulls. After the war Life gave him another assignment, this one a painted history of the beef cattle industry . Again, bulls came to his attention as the subject for his art, both as a writer and an illustrator. Out of that interest came the novel The Brave Bulls, which became a movie starring Mel Ferrer. Another novel followed, The Wonderful Country, featuring the borderland and the people who lived on both sides. This, too, became a movie, but the screen- play was so revised that Lea received nothing for it. Bob Parish, the director and a friend, was able to get Lea a bit part in the movie, enabling him to gain a salary as part of the cast.

By now Tom Lea the writer was on something of a roll. His Brave Bulls had found an aficionado in Helen Kleberg, wife of the King Ranch’s Bob Kleberg. With her encouragement Kleberg offered Lea the opportunity to write the history of the King Ranch, tantamount to the history of south Texas. That commission drove a three-year wedge into the friendship of Lea and Dobie, whom Lea suspected of wanting to write the history him- self and who wrote what was in Lea’s opinion a rather snide review of his two volume set, The King Ranch. In time the rift healed, and Lea served as a pallbearer at Dobie’s funeral.

So, whence Rio Grande in the White House? That’s Laura Bush’s story. Her grandparents were from Canutillo, a part of greater El Paso, where she was a frequent visitor during summers growing up. She’d read Lea’s books and, due to her father’s military service, was familiar with his war correspondence. When George became Governor of Texas, she had the opportunity to meet Tom and Sarah and became such an admirer she invited them to Austin to meet her husband. After his election to the Presidency in 2000, George asked Laura to select a Tom Lea oil to grace the Oval Office; she looked to the El Paso Museum of Art.  Rio Grande had been donated to the museum in 1996 when the Tom Lea Gallery was established there. Coincidentally , the classic landscape was the gift of Maureen and Robert Decherd, who was the grandson of Tom Lea Sr.’s law partner. When Lea died in January 2001, Laura Bush traveled to El Paso for his memorial service. It was her first trip as First Lady.

Even most Texans don’t realize the extent of Lea’s seven decade career. There are reasons. By his own admission he “never subscribed to any of the ‘isms,’ nor (did he seek) approval from critics, museums, directors, or art dealers.” Perhaps more significant is that his work is not generally displayed for public view, but resides in the homes of friends. That his work could be “in personal conversation” with those he cared for was most important to him.

Susan Pittman, a retired literature and art history teacher, is a resident of Fort Davis and Grapevine. She is a longtime aficionado of Tom Lea and of the Tom Lea Institute whose October events bring deserved attention to this Texas artist. e-mail: s.ramona1@verizon.net 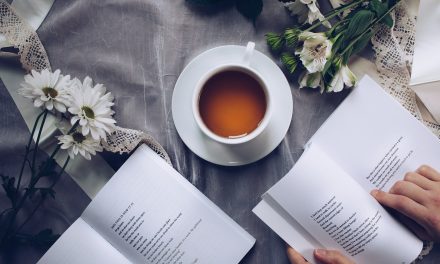 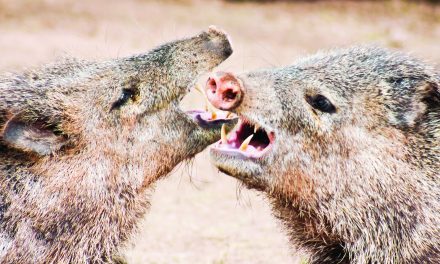